“Updating your BIOS” has a tendency to be a bit of a white-knuckle chore. Fraught with opportunity to use lots of non-free legacy tools and even if you make an effort to use all free software the actual flashing tool (not to mention the code in the BIOS firmware that you are flashing.) is historically non-free software. owflash32.exe? Sounds like something that would make me want to install clamav 🙂

Well, my free software loving friends, that doesn’t have to be the case! You can use

Developed by the same crowd that brought you coreboot; flashrom’s a tool that can read, write and erase flash chips like the ones that typically hold the BIOS image on a motherboard. Sort of like that brikflash32.exe that you used to download from your motherboard vendor, except instead of needing to find that 15 year old bootable floppy disk, it’s just an apt-get away. And you don’t even need to reboot. When things go well it’s as easy as:

You do still want to pay attention, as of course if you do manage to improperly flash the chip, it can be difficult or even impossible to recover. But flashrom is pretty good about keeping you out of that situation. While the software has no mechanism to verify that the image you’re trying to flash is appropriate for your board; it does automatically verify that your source file and the chip’s image match exactly and gives very clear feedback if anything goes wrong.

Uh oh. Erase/write failed. Checking if anything changed.
Your flash chip is in an unknown state.
Get help on IRC at chat.freenode.net (channel #flashrom) or
mail flashrom@flashrom.org with the subject "FAILED:

Just Kidding! that _never_ happens. (Or at least not often, unless you use the “–programmer internal:laptop=force_I_want_a_brick” option (not kidding that time.)

Unfortunately flashrom will refuse to flash most laptops, as the extra bit of hardware that laptops have, the “Embedded Controller” that handles battery charging and blinkenlights is often intermingled with the BIOS in undocumented and crash-prone ways.
You may have seen, that I’m excited to get coreboot running on some laptops. And that flashrom needs it’s hand held a bit to work in that situation. I’ll tell you that story some time too. (spoiler: it’s working)

But the next time you’re flashing a Desktop BIOS; or did I mention it also works great for updating the firmware on things like RAID controllers or updating the bootrom on your NIC? Give it a try; or haul that machine to the next glug meeting, and we’ll lend some cheerful and wreckless encouragement. 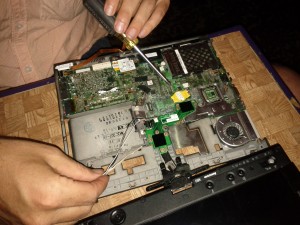 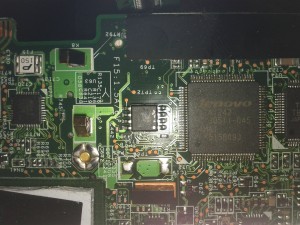